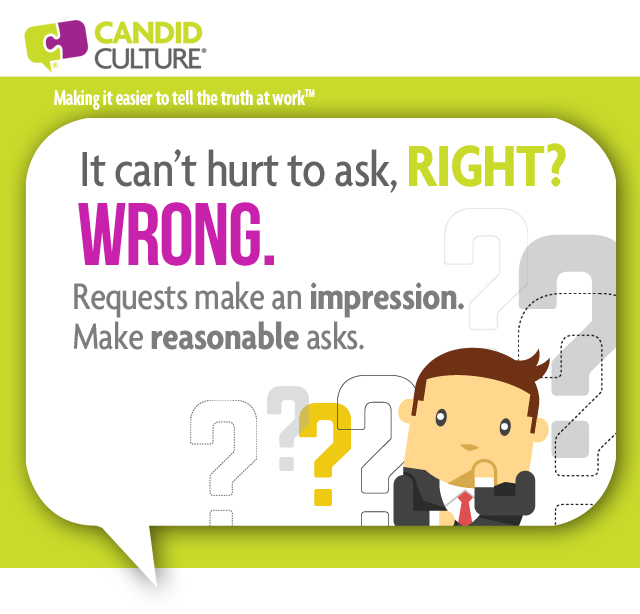 I recently interviewed a candidate who asked for a lot of ‘stuff’ during the interview process. He wanted compensation, perks, accommodations, and benefits that were way outside the norm. I’m assuming he was employing the adage we’ve all heard, that “it can’t hurt to ask.”  Unfortunately, it can hurt to ask.

When forging new relationships, we watch (judge) people. We’re trying to figure out who they are and how they are. Are they the person they claimed to be during the interview process? Are they trustworthy? Did I make the right decision in bringing this person into my team, organization, and life?

Requests always make an impression. When we’re building new relationships, requests make an even bigger impression. Candidates who said the commute wouldn’t be an issue, but complain about it two weeks into the job, cause managers to doubt their hiring decision. Coworkers who consistently ask for extensions to deadlines, appear unreliable.

People watch us and silently judge, making assessments about our commitment, reliability and even character. Don’t make people question you. Make reasonable asks.

It can’t hurt to ask, right? Wrong. Requests make an impression. Make reasonable asks. Repair a relationship, when you’ve asked for too much.

The post Asking for Too Much Can Damage Careers appeared first on Shari Harley.