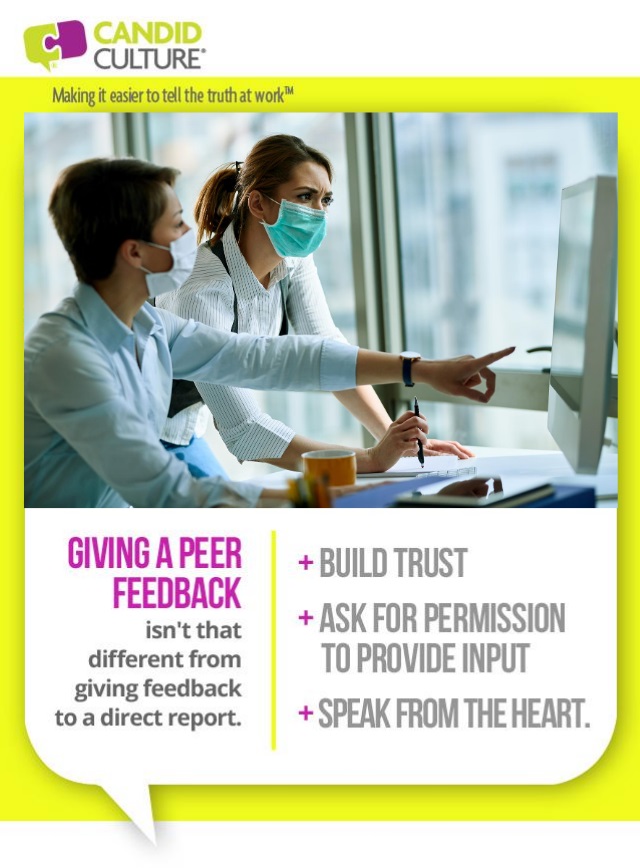 Giving peer feedback isn’t so different from giving feedback to a friend or even a direct report. While you have an implicit ‘right’ to give a direct report feedback, doing so without building trust will ensure your feedback falls flat.

People respond to feedback in predictable ways. Most people get upset and defend themselves. This is normal and natural. Negative feedback conflicts with our desire to be thought well of, which all people (despite what they might say) want. People are more open and less defensive when they trust the source of the feedback and trust the sources’ motives. Follow these practices when giving peer feedback and your feedback will hopefully be well received.

Also, consider why you want to give feedback. Do you simply want something done your way, or do you feel strongly that what the person is doing is having a negative impact on him/her or the organization? I worked with a business leader who red-lined every document his staff created. He didn’t only change language that was wrong, he edited documents so they were written more akin to his writing style. This made his staff feel that they couldn’t do anything right and it wouldn’t matter what they produced, he’d revise even the most ‘perfect’ work. So they stopped trying. Evaluate your true motive. Just because something wasn’t done your way, doesn’t mean it wasn’t done well.

Asking for permission to give feedback might sound something like, “I’ve noticed a few things that I think are making ________ project harder than it has to be. Would you be willing to talk with me about it?”

Or, “Our weekly team meetings are tough. It’s a challenging group. I have a couple of ideas that might make the meetings easier to run. Would you be interested in talking about them?”

Or, “I have something I want to share with you. I feel awkward bringing this up because we’re peers and I’m not sure it’s my place to do so. But I care about you and want you to be successful. Would it be ok if I shared? Feel free, of course, to say no.”

Giving peer feedback doesn’t have to be hard. Evaluate your motives. Ensure that what you plan to share is really feedback versus merely your opinion. Build trust, ask for permission, and speak from the heart. If you make a mess, you can always clean it up. Simply repeat the steps by saying something like, “I’m sorry if I hurt your feelings. I hope it’s ok I said something. I really want this project to go well for both you and the team. How could I have done that better for next time?”