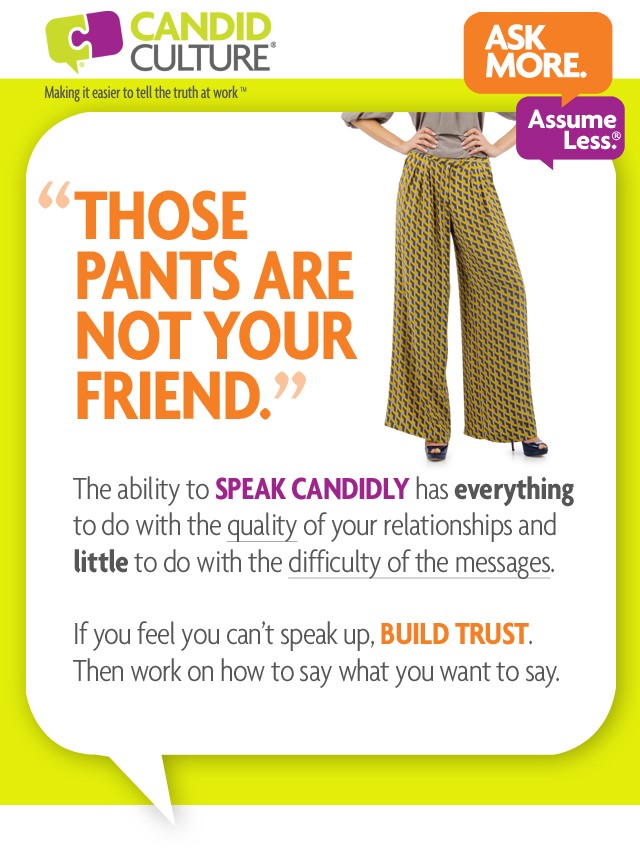 When I led leadership development training for a large mutual fund company we offered a lot of training focused on helping people have hard conversations. Over time I realized that despite that I’d bought and offered the best training programs I could find, the training wasn’t helping. Managers didn’t give enough feedback, and when they did give feedback, employees were often left confused, wondering what they needed to do differently.

I decided that what was missing was the conversation before the crucial conversation. It wasn’t that managers didn’t know what they wanted to say, but many managers felt they couldn’t say what they wanted to say. There wasn’t sufficient safety or permission for giving feedback, so managers said little or delivered messages that were so vague, employees were left wondering if there was a problem. This is when the idea for Candid Culture was born.

If you’re struggling with giving feedback, I doubt it’s the message that’s the challenge. The distinction between being able to tell the truth (as you see it) and saying nothing, is the quality of your relationship.

Think about the people – personal and professional – who can say anything to you. These are the people who can tell you that the person you’re dating is wrong for you, that a piece of clothing is not flattering, that you disappointed them, or that you dropped the ball. You may not enjoy getting the feedback, but you’re able to hear what they have to say and take it in because you know they care about you and have your best interests at heart. You trust their motives. When you trust people’s motives, they can say anything to you. When you don’t trust people’s motives, there is little they can say.

If you’re struggling to give feedback, evaluate your relationship by asking these three questions:

If the answer to any of the questions above is no, it’s not giving feedback you’re struggling with, it’s the quality of your relationship. Work on building trust with this person and you’ll be able to say whatever you feel you need to say.

When people know that you respect and want good things for them, you have a great deal of freedom to speak up. When people don’t trust your motives, giving feedback is almost impossible. The recipient will become defensive and dismiss whatever you say, rationalizing that you don’t like her and never have.