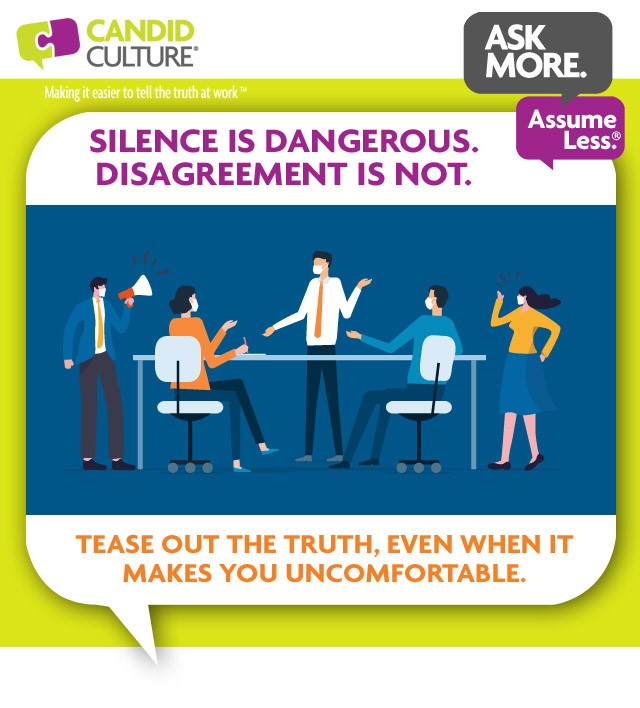 A few years ago, I facilitated a company-wide training program for an 80-person organization. Early in the program, we were talking about career deal breakers and I asked someone in the group to share a deal breaker so I knew that everyone was clear on what is and is not a true deal-breaker. An employee spoke up. She said, “I’ve been here six weeks. I’m overwhelmed and exhausted. If I don’t get some help soon, I’m leaving.” People in the room gasped audibly. And everyone surely thought the same thing – “She’s done. She’ll be gone by Monday.”

I ran into the organization’s CEO at the Denver airport two weeks later and we had dinner together. Over dinner, I asked if I could give him some advice. I said, “That woman who spoke up during the training did you a huge favor. You spent time and money to become a more candid organization; she gave you the opportunity to demonstrate whether or not you really mean it. Make sure nothing (bad) happens to her.”

It can be really hard when people disagree with us. Leaders institute a new practice, employees resist. Employees say they agree with a policy in a meeting but managers hear otherwise informally.

It may feel easier to introduce a practice and ask employees to follow it without asking what they think. And sometimes it makes sense to do that. You shouldn’t involve employees in every decision. But in an organization, it has to be safe to offer a counter-point-of-view. It must be safe to disagree – publicly and privately.

Disagreement is hard. But silence and the fear of speaking up is dangerous. Organizations full of yes people don’t innovate. They don’t solve problems or find new ways to save costs. They don’t grow, develop, or change. Hearing the truth takes courage and persistence. Put your ego aside and ask – again and again and again.

Every time I work with a new organization, at least one employee pulls me aside and tells me about the organization’s “list”. Employees who speak up and say things the leadership team disagree with get put on the “list”. And employees who make the “list” disappear from the organization. Mind you, no one has ever seen this “list”, but employees everywhere are convinced it exists. And this is a challenge for leaders.

Even leaders who do all the right things regarding asking for and being open to all kinds of input are up against the belief that it isn’t safe to tell the truth at work. It may not even be true. There may be no consequences whatsoever for speaking up, but the perception of the negative consequence is what matters. And this perception is powerful and pervasive across organizations.

So what is to be done? How do leaders get the truth when employees are afraid, disbelieving and perhaps cynical?

Below are seven practices for leaders and managers to get more truth in their organization: