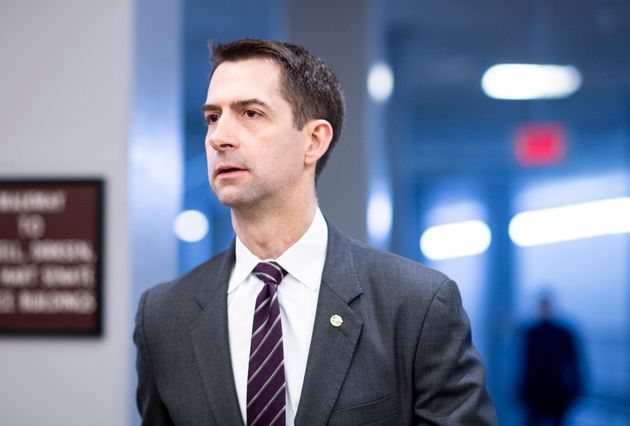 On Wednesday, The New York Times published an op-ed by Sen. Tom Cotton (R-Ark.) advocating that the U.S. military be sent in to crush popular protests against police brutality and systemic racism. “Send in the troops,” blared the headline. “The nation must restore order. The military stands ready.”

Cotton pays lip service to the value of peaceful protesters and piously invokes the use of the military to protect Black students integrating Little Rock Central High School — tellingly, against the Arkansas governor’s previous deployment of the National Guard to prevent desegregation — while also spreading misinformation about the protests that has been debunked elsewhere by the Times, and calling for the unrest to be quelled by “an overwhelming show of force.” He suggests that many who oppose military action are making a “revolting moral equivalence of rioters and looters to peaceful, law-abiding protesters. A majority who seek to protest peacefully shouldn’t be confused with bands of miscreants.”

And yet throughout the piece, in which Cotton calls for troops to “restore order to our streets” and to “disperse, detain and ultimately deter lawbreakers,” he, and other law-and-order advocates, are the ones failing to draw a meaningful distinction between looting and protesting. Unmentioned by Cotton are the countless reports of police violence against peaceful protesters or bystanders — pepper spray, rubber bullets, beatings — and even the frequent deployment of tear gas, the use of which on the battlefield is considered a war crime. Cities across the country have instituted strategic curfews to enable police to assault people for the mere act of protesting in the streets. If there is no clear distinction between looters and protesters, it is because state, local and federal governments have chosen to make criminals, and targets, out of them all.

Calling for this unrest to now be crushed puts every protester on the streets, and likely many bystanders, at risk. It puts Black people at risk. Cotton, as a sitting senator, already has a significant platform and the ability to shape laws; his previous statement and tweets on the subject were deeply alarming on their own. But by lending the credibility of a Times byline to this call for a crackdown, Times editorial page editor James Bennet betrayed his own colleagues and increased the risk to American lives.

Numerous Times staffers spoke out against the op-ed on Twitter, many tweeting a screenshot of the headline and stating that running the piece put Black Times staff — and all Black people — in danger. The NewsGuild of New York, which represents the New York Times’ union, released a statement elaborating on this point: “Invariably, invoking state violence disproportionately hurts Black and brown people. It also jeopardizes our journalists’ ability to work in the field safely and effectively.”

This swell of outrage put Bennet in the position of explaining his harmful decisions — not for the first time, but perhaps more urgently than ever before. In a six-tweet thread on Wednesday night, he made the following points of defense:

The New York Times editorial board has already condemned police violence against protesters and the “underlying, systemic cruelties that led to these protests,” and published pieces in support of the protests.

The Times Opinion section “owes it to our readers to show them counter-arguments, particularly those made by people in a position to set policy.”

Finally, Bennet noted, many consider Cotton’s argument to be “painful, even dangerous.” This is, in itself, he claimed, “one reason it requires public scrutiny and debate.”

The Times certainly does have a duty to inform its readers about the heinous views of a politician who holds the power to set policy. It could do this, for example, in its news section, in a reported piece that provides vital context about how many of his claims are lies or unsubstantiated propaganda. (Of course, we are speaking of a paper that went with “As Chaos Spreads, Trump Vows to ’End It Now” for its front page the day after President Donald Trump had peaceful protesters assaulted with tear gas in order to stage a photo op in front of a church, so one balks at that alternative as well.) Or, if Bennet wishes to do so in his own section, the Times could fulfill this duty through opinion pieces that confront Cotton’s elisions of fact and authoritarian rhetoric.

Much as Cotton deftly suggests that his tweets and column calling for Black Lives Matter protesters to be mowed down place him in some glorious tradition of American political leaders who defended civil rights activists against white supremacists, Bennet here argues that he is fulfilling the role of holding violent rhetoric to account by disseminating it more broadly and with more perceived legitimacy.

To the outcry from his Black colleagues, whose safety is compromised by this rhetoric, Bennet offers an assurance that he knows they are afraid, and that this was only more motivation for him to proceed.

“We understand that many readers find Senator Cotton’s argument painful, even dangerous,” he tweeted. “We believe that is one reason it requires public scrutiny and debate.”

Though put forth in the vacuous, smug verbiage of prim centrism, this is an alarming statement. It does not only suggest that the best method of publicly scrutinizing a senator’s remarks is to amplify them and lend them the imprimatur of a Times byline, rather than to actually scrutinize them. It does not only place screeds that foment state violence against Black people within the realm of legitimate debate. It tells Black people that their fear and pain is not only an unfortunate byproduct of publishing this piece, but a desired, or at least accepted, outcome.

The cruelty of this is staggering. That it’s directed in large part at his own Black colleagues, as they beg for their humanity to be respected by their own employer, only makes it more brazen.

The Times opinion section has a storied history of telling its critics, most of whom have not been offered a Times platform, that denying that platform to someone with vile views would violate free speech. New York Magazine writer and Ann Coulter lionizer Olivia Nuzzi took this tack on Twitter, supporting the publication of the op-ed as “a free speech radical” and arguing that critics should counter bad opinions with “a better opinion.”

But, as Bennet surely understands, this is not a free speech issue. Cotton’s views are not suppressed when he must release them in a statement as a U.S. senator rather than in the pages of the New York Times. This is a question of presenting ideas for debate ― a debate for which he, as Times editorial page editor, is empowered to define the scope. He chooses which positions are worthy of the opportunity to jostle for dominance as the “better opinion” in the marketplace of ideas.

Some have defended the decision by pointing out that in the past, the Times has published op-eds by writers such as a Taliban leader, Vladimir Putin, and even Adolf Hitler. Of course, this doesn’t mean that the Times can’t set limits on acceptable topics for debate, merely that they have done so very badly for a long time.

Perhaps most revealing was the apparent defense offered by David Brooks, the Times’s resident chinstroker, who tweeted:

If it causes him to think, I suppose we can only say: finally. But as greatly as it is to be desired that Brooks begins to use his brain as something other than unclaimed storage space, there are graver issues at stake. On the one hand, the safety of Black people and, more broadly, protesters; on the other, a little brainteaser to supplement Brooks’s daily Sudoku and ginkgo biloba tablet. Which should outweigh the other?

Again and again, Bennet and his allies offer up rationalizations for running violent propaganda that have more to do with self-indulgence ― a little thought experiment, a little lively conversation, a little statement about how much they simply love free speech ― than their responsibility to the public.

On Thursday afternoon, as the massive protest from his colleagues and outside critics was not quelled by his Twitter thread or handful of online defenders, Bennet took advantage of the Times editorial page to retread his arguments in more depth, and to attempt to rebut some of the counterarguments offered above by continuing to insist that publishing a falsehood-riddled essay for Times readers was a solid way to ensure that Cotton’s argument failed in the intellectual marketplace.

But as much as Bennet and the Times apparently wish to run dangerous government propaganda in its pages, there is no good defense for doing so. Even Bennet can’t exactly defend it, it seems. “To me, debating influential ideas openly, rather than letting them go unchallenged, is far more likely to help society reach the right answers,” his essay concludes. “But it is impossible to feel righteous about any of this. I know that my own view may be wrong.”