On ‘America’s Got Talent,’ A Homeless Choir From San Diego Strikes Gold 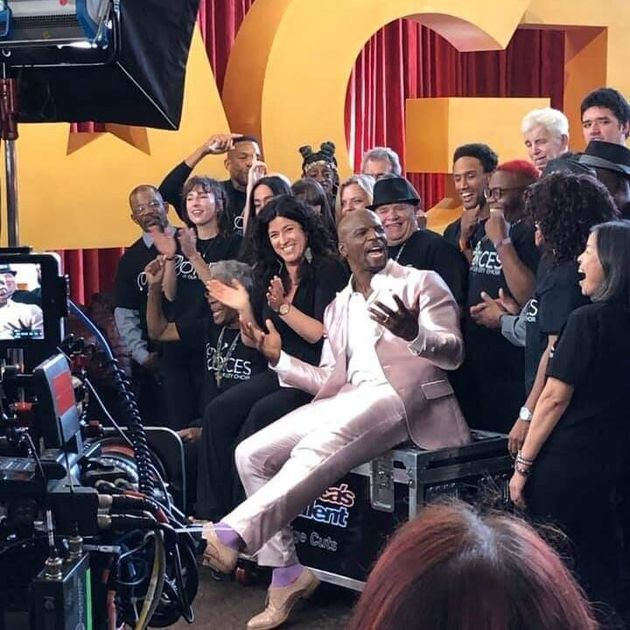 On ‘America’s Got Talent,’ A Homeless Choir From San Diego Strikes Gold

Before coronavirus forced the country into quarantine, Derek Williams was “outdoors.” He’s part of a group of people experiencing homelessness who sometimes sleep in Balboa Park, a lush tourist area near downtown San Diego.

Williams has a scruffy, graying beard. He favors a beige fedora. The 55-year-old University of Southern California alumnus shelters in a camping tent he sometimes shares with an ex-girlfriend. There’s a twinkle in his blue eyes when he talks about singing to entertain friends who also live on the street. His showmanship has earned him the nicknames “DJ Derek” and “D-Rock.”

A passion for music led D-Rock to join the Voices of Our City Choir, an organized singing group for local homeless folks. Over the last few years, Voices of Our City has metamorphosed into a lifeline for the disenfranchised, offering hope to the homeless. What once was a stem peeking out between a sidewalk crack has been tended into a flower garden of love and inspiration.

D-Rock and the rest of the choir got to share their skills with millions of viewers Tuesday night on the premiere of “America’s Got Talent,” NBC’s talent-show smorgasbord and ratings juggernaut, hosted by actor Terry Crews.

And Voices of Our City’s “AGT” audition was a huge hit. The 2,500-person audience went berserk, standing and cheering wildly. Onstage and off, there were tears of happiness and joy and incredulity. Sure, “AGT” audiences are known for over-the-top applause. But the choir won the show’s coveted Golden Buzzer — complete with a shower of gold glitter — an award that grants the group automatic advancement to the show’s semifinal rounds.

Getting To The Show On Time

On a pre-pandemic March 7, D-Rock rises and shines early at his tent. He needs time to get to downtown San Diego’s East Village. That’s where a charter bus is waiting to take 50 choir members to audition for “America’s Got Talent.”

“Once I get on that bus, I know this is for real,” D-Rock says. “I had been telling people it was going to happen, but I’m not sure if I’d believed it myself.”

The two-and-a-half-hour drive to Pasadena was like a magic carpet ride.

“Insane” is how Steph Johnson describes the vibe inside the “AGT” charter bus.

“Everybody is singing and cheering for each other — it’s total excitement,” says Johnson, a talented singer, songwriter and guitarist. She’s the founder, creative director and executive director of the 250-member Voices of Our City Choir, which recently became a 501(c)(3) nonprofit organization.

Johnson is the last one to board the bus. Often, she drives the choir to gigs in a much smaller Dodge van. On this day, she’s a passenger and is enjoying the ride.

“I take a seat on the back of the bus next to our board president and tell her I’m going to cry,” Johnson says. “She looks at me and goes, ‘That’s OK. I’ve already cried five times.’”

The Birth Of A Homeless Choir

In a country with more than half a million unsheltered residents, the city and county of San Diego ranked fifth on the list of regions with the highest number of people experiencing homelessness.

Two years ago, Sean DiMarius was sleeping in the Alpha Project’s 325-bed Temporary Bridge Shelter. He noticed a flyer about the choir meeting in the Living Water Church of the Nazarene. His interest was piqued, but he demurred.

“I saw it was in a church, and I said no,” recalls the 40-year-old man, who identifies himself as transgender. He wears a Superman baseball cap over a short crop of red-dyed hair. “I didn’t want to hear no God talk, telling me God gonna make everything better while I’m sleeping on the street.”

By chance, DiMarius later met Johnson at a community event. Among a multitude of honors, Johnson was named 2020 Woman of the Year by San Diego assembly member Todd Gloria. Her own jazz album, “So in Love,” is due out this summer.

“I see and hear this wonderful lady playing music,” DiMarius says. “And it was like she’d come to get me.”

Armed with her 100-watt smile, Johnson gave DiMarius a choir songbook. Nobody smiles like that at everybody, he thought to himself. Shortly after, DiMarius showed up for a Friday choir practice.

Ricky Infante agrees. The 25-year-old self-identified transgender woman has been on and off the streets since running away from home as a teen to escape physical and verbal abuse. She almost never misses a choir practice.

“When I’m feeling negative, I can take in the ambiance of the choir and feel better,” Infante says shyly. “It’s filled with so much love and authenticity.”

Johnson held the first official choir practice in 2016. It included a half dozen people, including Mark Sheetz. Homeless then and now, he’s sheltering during the pandemic with 1,200 others in the convention-less San Diego Convention Center.

“I had a feeling this choir could be something,” Sheetz, 57, says in a gravelly voice. “I guess I never thought it would get on ‘America’s Got Talent’ or that I’d meet Terry Crews.”

John Brady is one of 60-plus choir members who found housing through services run by Voices of Our City. He is now a paid staffer and an advocate on several San Diego boards. He also advises the mayor and the city council on homelessness issues.

Brady was desperate and suicidal following a brutal hate crime and was living right outside the Living Waters Church when he first met Johnson. “I had a background in stage, lighting [and] audio,” he says. “I offered to set up the sound system in the church, and Steph roped me in.”

Johnson and the choir are on a journey that’s likely to hit warp speed following the group’s national TV appearance on “AGT.”

In the last few years, Voices of Our City’s profile has risen. The choir is the subject of aSusan Polis Schutz documentary that aired nationally on PBS. The group sang“Amazing Grace” with the San Diego Symphony. And it performed at the historicWiltern Theatre in Los Angeles on a bill withJason Mraz and original members ofThe Doors.

How did the group get here? It wasn’t easy. The road was bumpy. Johnson points to one primary factor that moved the needle. When opportunities arose, she always said, “Yes.”

“If anybody reads about us or sees us on TV and is moved, they should come away with one idea,” Johnson says — smiling, of course. “It’s that one person really can make a difference.”

Not because that one individual has to carry the full burden or save the world.

“One person will attract another person and another,” Johnson says. “Pretty soon you have a mission. If your true intention is to create a solution for a societal problem, then it’s going to be a positive.”

Johnson and the choir co-wrote an original song for the “AGT” audition, “Sounds of the Sidewalk,” about the homeless experience. The upbeat collaboration includes a spoken-word solo by 62-year-old Patricia Gaines.

Homeless off and on for most of her life, Gaines uses a wheeled walker to get around. Soft-spoken and polite, she’s the epitome of that kindly lady who passes you the peace during church service.

It’s jarring when she quietly says that, if she wasn’t singing with the choir, she’d probably be out drunk somewhere.

“The choir is a blessing that drew me away from alcoholism,” Gaines says. “Not only that, it inspires me to write down what I’m feeling. Before, I kept those feelings on the inside. And drowned them with alcohol and drugs. Now, I let them out. And it matters to somebody.”

Gaines’ solo on “Sounds of the Sidewalk” is about a bygone vision of her mother leaving the kids for an evening.

“She wore high heels and a nice dress, … and I would watch her going out … to do whatever it was,” Gaines recalls. “She was beautiful, and she had a rhythm. And she always told us, ‘Everything gonna be all right.’”

The Power Of Music

At the nucleus of the choir’s soul-tugging message: the power of music.

“Singing is a metaphor for having a voice,” Johnson says. “It feels good to open up and say what you want to say. Art is a vital way for people to rediscover their worth. And it has a ripple effect.”

She hopes the “AGT” exposure helps in some way to melt away the barriers separating people from those who live just outside their own safe walls.

“Think about how we’ve all been in quarantine,” Johnson says. “Imagine the whole world is instructed to stay home — but you don’t have a home. That adds an extra heaviness to homelessness. If it’s possible, it makes you feel even more alone. The isolation is triggering. It feels bleak. It’s like you matter even less.”

The choir will be back on TV later this summer. Rest assured, whether it’s a Christmas concert, a corporate gig or a highly produced TV talent show, Voices of Our City has the mojo to profoundly move an audience.

“It’s a cosmic and totally spiritual experience,” Johnson says. “Audiences don’t expect the choir to be brilliant. But our music hits on a deeply emotional level. It moves people, and it has a heavy impact.”

Now living in a single room occupancy hotel, D-Rock carries an “AGT” memento in his wallet — a rectangular piece of golden glitter that flitted into his mouth during the Golden Buzzer hoopla.

“We rocked the house,” D-Rock says.